FUNGUS = EW!!  Just saying the word makes my face squish up like I smelled something rotten!  Bette and I enjoy an active lifestyle.  We go camping and hike and get our exercise on the trails and creeks of Austin.   A few weeks ago I noticed an odd brown tint at the base of her nail.  It was brown, in some places clumpy, and getting worse.  I learned it was nail fungus and that’ it’s quite common in working dogs which makes sense due to their activities.  Working dogs are in and out of wet and damp areas where the Ph is low such as streams, rivers, and creeks.  Does your dog like to dig – they may have picked it up when they found the moist dark corner of a rotting tree or on your recent hike.  Canine nail fungus is caused by the fungal microorganism Blastomyces Dermatitidis and is more common in males than females for no known reason.

So, how to treat this brown nail bed intruder?

APPLE CIDER VINEGAR to the rescue!

Vinegar is a natural antiseptic and is a fantastic natural home remedy to kill germs and any possible fungal infection. Plus if they lick it, which they probably will, it won’t harm them.  Another option is to get a cream from your vet.

I mixed 1/2 water with 1/2 apple cider vinegar (ACV) and have been applying it to Bette’s nails 1x/day for two weeks and I’ve seen significant improvement – YAY!!  If we go on a hike and get in the water – ACV application is the first thing we do when we get home.   ACV worked for us, but another option did work faster when we had a second bout of it.  Chlorhexidine pads knocked it out twice as fast with daily application.  Nail fungus isn’t going to keep us away from the fun of the trail!! 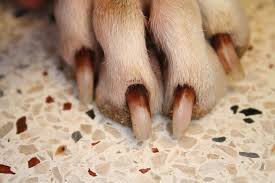 Betty and my battle against nail fungus continues.  ACV works, but you have to be incredibly consistent.  I did it every day for two months and saw improvement, but if I ever slacked or missed a few days – the fungus came back FAST.  Honestly, it was too time-consuming and I got tired of smelling like ACV all the time.

I now use DOUXO Chlorhexidine Mouse and boy howdy this stuff works 5x faster and is easier to apply!